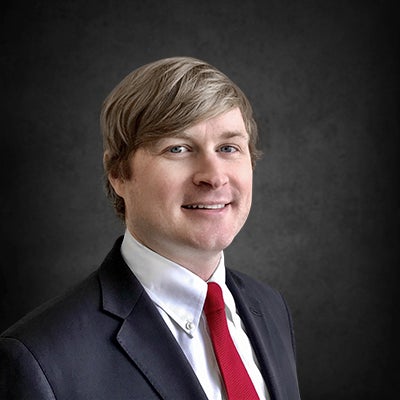 Burke Keaty has spent his entire career helping injured victims and their families hold wrongdoers responsible for the harms they cause. Burke has successfully resolved hundreds of cases on behalf of clients injured in car, motorcycle, bus, and tractor-trailer collisions, as well as pedestrians and bicyclists harmed by others on the roadway. He also handles cases against individuals and businesses who allow dangerous conditions to exist on their property or who otherwise engage in unsafe conduct. In addition, he represents children and adults who are injured when careless dog owners allow their pets to attack or run at large and cause injuries.

Burke has earned an AV Preeminent 5.0 Martindale-Hubbell ranking, which is the highest ranking possible. He has been selected as a Super Lawyers Mid-South Rising Star from 2014 to 2019. The National Trial Lawyers Association selected Burke as one of the “Top 40 Under 40” lawyers in Tennessee in 2014.

Burke went to college at the University of Tennessee in Knoxville, graduating with honors in 2005 with a major in Finance and minor in Accounting. He then attended the University of Tennessee College of Law, graduating in 2008. During law school in Knoxville he had an invaluable clerkship working for an outstanding trial lawyer named Bob Pryor, Sr., who cemented Burke's desire to practice personal injury law. After graduating, Burke returned home to Nashville to work with attorney John Day and was a partner at his firm before coming to Morgan & Morgan in 2017.

Burke is married to Jenney Springer Keaty, who’s also a trial lawyer at Morgan & Morgan. They live in Nashville with their four young boys. Most of their free time is currently spent outdoors on playgrounds or walking in their neighborhood with the family dog, Mac, a rescued golden retriever mix. Burke and his wife work with and have served on charitable committees for CASA (Court Appointed Special Advocates) and PULSE, a young professionals organization supporting the American Heart Association.

Below is a list of Burke's speeches and published articles: