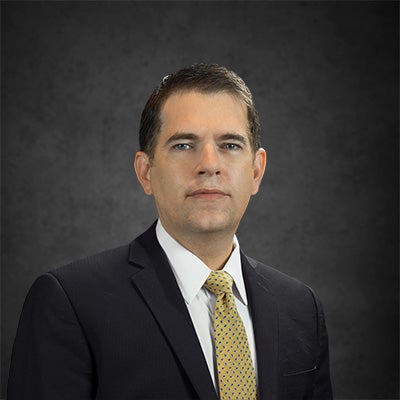 Mr. Scheele was born and raised in Wisconsin. He received his undergraduate education at the University of Wisconsin-Milwaukee, where he graduated with honors with a degree in Business Administration and a minor in Philosophy. He moved to Florida in 1999 to attend law school at the Florida State University College of Law where he graduated with honors. During law school, he was a member of the Trial Advocacy Team and achieved the recognition of “Best Advocate” at the law school for the intramural competition. In addition, he was the President and founding member of the FSU Law branch of the American Trial Lawyers Association.

Mr. Scheele was recruited out of law school by Florida’s then largest firm, Fowler, White, Boggs, Banker. When Fowler White split in 2008, Mr. Scheele joined the same group of lawyers under a new firm name – Banker, Lopez, Gassler, where he was a full partner and a liaison member of the Board of Directors. Mr. Scheele was responsible for some of the firm’s largest clients and developed one of the largest practice groups at the firm. He was recognized by his peers at Banker Lopez as a recipient of the “Top Gun Award” – a recognition given to the attorney with the most trial success at the firm. Mr. Scheele has tried over 70 jury trials to verdict, including several wrongful death cases, quadriplegic cases and other serious injury cases. He has recovered millions of dollars in verdicts and settlements for his clients.

One of Mr. Scheele’s recent trials resulted in the highest verdict in the history of Hernando County – a $41,000,000.00 verdict in favor of a quadriplegic who was involved in a very serious car accident after being served alcohol underage at a local bar. Mr. Scheele served a critical role in having the bar held responsible. Mr. Scheele is a Board Certified Civil Trial Lawyer – a very prestigious recognition which is attained by less than two percent of all Florida attorneys. In addition, Mr. Scheele has been honored with the prestigious “AV Rating” by Martindale-Hubbel, the preeminent national publication in the legal field.

This rating is based on evaluations by other lawyers and judges and is the highest rating attainable by an attorney for ability and ethics in the practice of law. This distinction is given to a very select few in the legal community. Mr. Scheele also has been named “Super Lawyer” in his specialty on multiple occasions by the Super Lawyers publication, as well being named “Legal Elite” for several years, as published by Florida Trend Magazine.

Mr. Scheele lives in Tampa with his wife, Kait, and their three children – Maxwell, London and Livia.