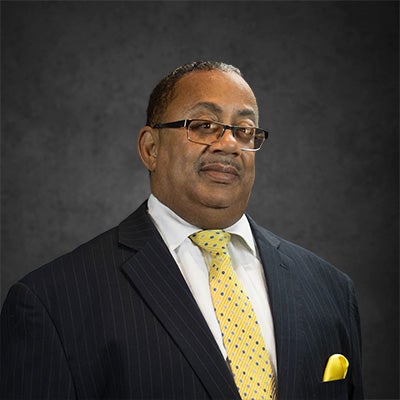 Belvin Perry, Jr. was born on October 11, 1949 to Belvin Perry, Sr. and Jessie M. Perry of Orlando, Florida. He graduated from Jones High School in Orlando. Raised to value public service, his mother worked as a public school teacher and his father served in law enforcement as one of the first two African-American police officers to be hired by the Orlando Police Department.

He attended Tuskegee University where he received a Bachelor of Science in History in 1972 and a Master of Education in Student Personnel Services in 1974. He went on to study law at Thurgood Marshall School of Law where he received his Juris Doctor in 1977. He began his legal career with the Office of the State Attorney serving as a Trial Attorney in 1977.

He quickly rose through the ranks with the State Attorney’s Office, concluding his service with the prosecutor’s office as Chief Assistant State Attorney in 1989. In January of that same year, he became the first African-American to be elected to the circuit bench of the Ninth Circuit without first being appointed. While serving as a judge for nearly 25 years he has served as Administrative Judge in Osceola County and served nine terms as Chief Judge of the Ninth Judicial Circuit.

In his professional activities as a judge he has served as President of the National Conference of Metropolitan Courts, 2010 -2011 and as Chair of the Florida Innocence Commission. He also serves on the Trial Court Budget Commission where he previously served as Chair for four years.