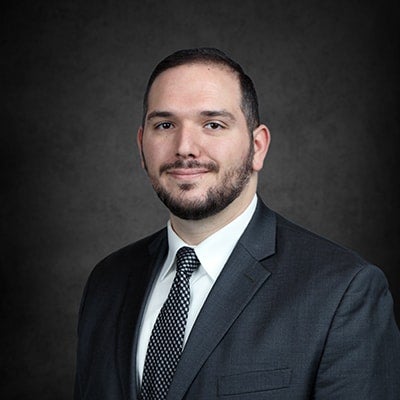 Mr. Jaghab joined Morgan & Morgan to take his litigation talents and passion for justice to those who feel they are no longer able to help themselves. As a trial attorney at the firm, he has helped individual and business policyholders recover millions of dollars in insurance benefits that were wrongfully denied, incorrectly paid, or lowballed by insurance companies.

Mr. Jaghab is extremely well-versed in litigating matters for any kind of contractual or insurance-related dispute, including bad faith claims against an insurance company. His practice primarily focuses on insurance recovery, with disputes involving residential or commercial property claims, automobile damage, business interruption, and life/health/disability benefits that have been denied. He is admitted to all state and federal courts in the State of Florida and the State of Louisiana. In the event of any appeal that be necessary, he is also admitted to the Fifth Circuit Court of Appeals, Eleventh Circuit Court of Appeals, and the United States Supreme Court.

Mr. Jaghab began his legal career working as an Assistant State Attorney for the 4th Judicial Circuit of Florida. During this time, he worked in multiple counties prosecuting various crimes ranging from crimes of violence, drug offenses, white-collar crimes, and driving under the influence. After leaving public service, he worked for the largest civil defense firm in Florida representing and defending large insurance carriers in personal injury claims, breach of contract, coverage disputes, and insurance fraud matters.

Mr. Jaghab received his bachelor’s degree from the University of Central Florida, his master’s degree from Jacksonville University, and his law degree from Florida Coastal School of Law. During his academic career, he received a certificate in Business Law, earned a Dean’s Merit Scholarship, received a Pro Bono Honors distinction upon graduation, and interned with the United States Attorney’s Office for the Middle District of Florida.