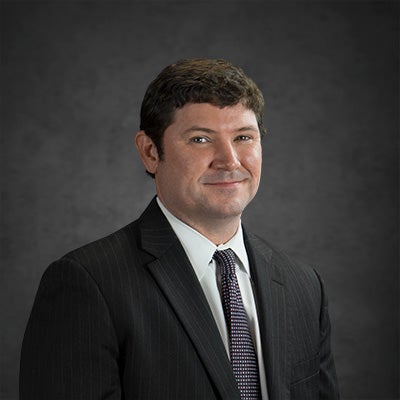 Robert L. Hendrix, III (Rob), is an accomplished trial lawyer that has recovered over $35,000,000.00 in benefits for his clients in over sixteen years of practice. His practice focuses exclusively on representing injured individuals in Georgia workers’ compensation claims. He has tried over one hundred cases in every corner of the State in front of nearly every Administrative Law Judge.

In addition to Mr. Hendix's trial accomplishments, he is also an experienced appellate advocate. Mr. Hendrix has handled numerous matters through the appellate process, including the Georgia Court of Appeals and Georgia Supreme Court. Notably, he received a favorable decision in Dekalb County Board of Education v. Singleon, 294 Ga. App. 96; 668 S.E. 2d 767 (2008), which was landmark in that the decision allowed for an injured employee to receive income benefits for a psychic only injury after the physical injury resolved.

Mr. Hendrix has been recognized frequently for his skill as an attorney. He holds an AV rating from Martindale reflecting the highest level of professional skill and ethical standards. For four straight years (2010 – 2013) he was named a Georgia Rising Star SuperLawyer, which is published by Atlanta Magazine in conjunction with Law & Politics Magazine. This is an honor recognizing the top 2.5% of attorneys in their practice area under the age of forty. In 2014, Mr. Hendrix was named a Georgia SuperLawyer recognizing the top 5% of all attorneys in their practice area, making him the youngest to receive this honor. He has continued to receive this honor from 2015-2020. Additionally, Mr. Hendrix was named a Top 100 by The National Trial Lawyers. Further, he has also been named a Top 40 Under 40 by the American Society of Legal Advocates for 2013 & 2014. Mr. Hendrix has also been named one of the Best Attorneys in America by Rue Ratings, recognizing less than 1% of attorneys nationwide. He has been honored as a Premier 100 by the American Academy of Trial Lawyers, and a Top Lawyer by the Global Directory of Who’s Who.

Mr. Hendrix takes his obligations to leadership seriously and is active in the legal community at the National, State and local levels. He served as Chair of the Workplace Injury Section of the American Association for Justice. Additionally, Mr. Hendrix serves on the Executive Board as President Elect of the Workers’ Compensation Claimant’s Lawyers (WCCL) arm of the Georgia Trial Lawyers Association. Previously, he served on the Amicus Curiae Committee of the Georgia Legal Foundation aimed at addressing appellate issues in workers’ compensation. Finally, he is a Member of the American Bar Association, Workers’ Injury Law Group (WILG), State Bar of Georgia and Columbus Bar Association.

Mr. Hendrix also lectures on legal issues outside of bar related events. More specifically, he was featured on the radio as an invited speaker on Atlanta Legal Experts. Further, he has been an invited guest lecturer to the legal studies and paralegal programs at Clayton State University and Georgia State University.

Personally, Mr. Hendrix enjoys spending time with his his three children (Sammy, Harrison & Max). This keeps him busy, especially coaching soccer, football and basketball when not shuttling the kids to tennis, reading bowl, robotics competitions, guitar and drum lessons, plays and running competitions. When not busy with the kids, he is passionate about following his beloved Georgia Bulldogs and traveling (especially to Las Vegas).