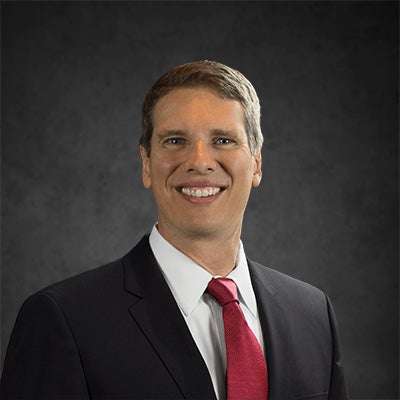 Michael Smith is the managing partner of the Tavares and Ocala office locations in Lake and Marion County, Florida and is also a member of the firm’s state-wide risk management committee. Mr. Smith has been practicing law since 1996 and is admitted to the Florida Bar. In 2009, he achieved board certification in civil trial law which recognizes highly specialized achievement and expertise very few lawyers in Florida acquire. He currently maintains this recognition with the Florida Bar.

He was raised in Ocala, Florida and graduated with high honors from Forest High School. He attended the University of Florida, graduating with a bachelor of science degree in Zoology with honors.

Mr. Smith then attended Stetson University College of Law where he also graduated with honors. Mr. Smith began his legal career as an assistant state attorney for the State of Florida. He prosecuted such crimes as drug trafficking, sex crimes, and was specially appointed as a felony domestic violence prosecutor. During the 3 years he served as a prosecutor, he conducted over 50 jury trials. Following his government service, Mr. Smith was an in-house attorney for State Farm Insurance Company as a claims litigation attorney. He worked for 2 years for State Farm specializing in personal injury and insurance dispute cases.

Since joining Morgan and Morgan in 2001, Mr. Smith has represented thousands of clients and their families injured by the negligence of others. He has obtained awards from juries in far excess of the offers made by insurance companies and has even successfully obtained settlements from major corporations.