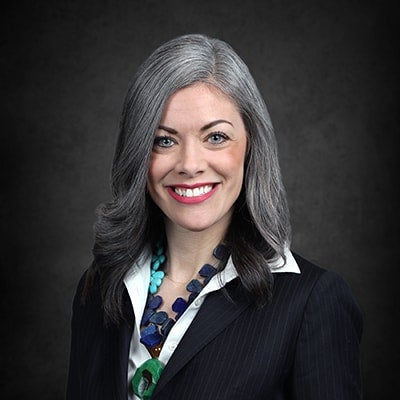 Jenney Keaty is a plaintiff’s attorney in Nashville, Tennessee where she handles wrongful death, medical malpractice, and other tort injury litigation for individuals and families across the State of Tennessee. She represents severely injured people, or people who have lost a loved one as the result of someone else’s negligence or recklessness. She has tried cases to a jury in multiple counties in Tennessee, including being awarded a $1.75 million verdict for the plaintiffs in a medical malpractice case by a Rutherford County jury last year.

Mrs. Keaty is a leader in the legal community. She organized the Wills for Heroes Program in Davidson County, Tennessee for four years. During the program’s annual events, volunteer attorneys provided our community’s first responders with essential legal documents, like wills, living wills, and powers of attorney, free of charge. During her tenure as the chair of the Davidson County Wills for Heroes Program, the program served over 450 first responders and their spouses.

Mrs. Keaty graduated from The Ohio State University, where she studied Criminology, English, and Dance as a member of the Honors & Scholars Program. Mrs. Keaty then attended and graduated from The University of Tennessee College of Law. In law school, she focused her studies on advocacy and dispute resolution. She won the Award for Academic Excellence in Legal Process and the Award for Academic Excellence in Alternative Dispute Resolution. Mrs. Keaty also practiced law as a student, under the supervision of a faculty member, in the advocacy and mediation clinics.

A native of West Virginia, Mrs. Keaty has lived in Tennessee for more than ten years. She is married to Burke Keaty, who is also a lawyer at Morgan & Morgan – Nashville. Their household is busy and giggle-filled because of their three-year-old son, Trip, and identical one-year-old twin boys, Jay and Car.