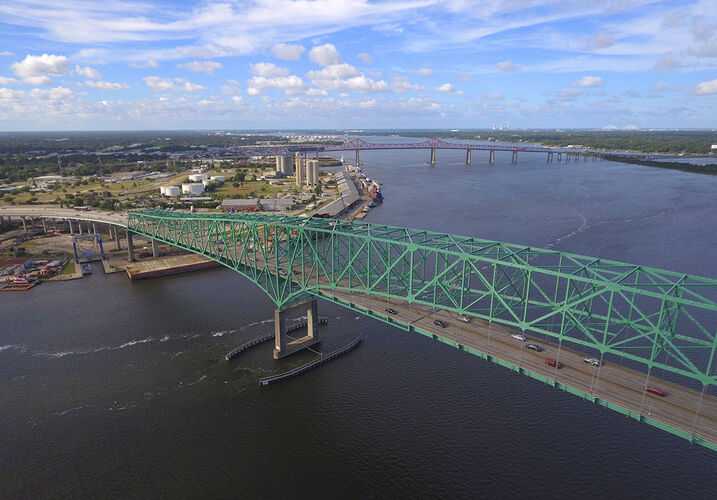 Growth is a big theme for Jacksonville's upcoming year, and next year’s construction plans are already beginning to shine with promise. The city made strides downtown at the end of 2016, and rumblings of the future could promise to reshape the city’s amenities and roads, especially near the waterfront.

The mayor is focusing on the Hart Bridge, which could play into waterfront redevelopment, according to the Jacksonville Times-Union. Other changes could be seen with this huge project, like expanding the Skyway. Here are how some of the biggest projects look, and how they might affect traffic going forward.

More changes could be coming to the Hart Bridge, but in the opposite direction than the city and the Florida Department of Transportation have undertaken already. The mayor told the area’s legislators at a summit that the Hart Bridge’s exit ramps “were originally designed to bypass the industrialized waterfront,” suggesting they are now getting in the way of its development.

The mayor is interested in tearing down the Hart Bridge’s ramp system, supposedly for safety and traffic reasons, according to the Times-Union. But the publication noted the request coincides with emerging plans to revitalize the riverfront.

The price tag on the bridge renovation is expected to be $50 million, and some legislators at the meeting were already onboard. Jacksonville could soon see help from a state interested in giving one of its most important cities a makeover.

Currently, little is known about the plans for the Hart Bridge exit ramps, other than the mayor wants them gone. How the traffic ramps will be diverted remains to be seen, but sending it straight onto the surface or directing exit ramps elsewhere could pose a challenge. Removing or redirecting the expansive ramp system and its traffic, however, is one of the first steps to changing part of downtown’s image, so it must be done.

The Bridge is Part of a Larger Planned Development

Modernizing Jacksonville’s downtown waterfront has long been on the city’s to-do list, and it is in the process of hashing out terms with Shahid Khan, the owner of the Jacksonville Jaguars and a strong business interest in the city.

The tarp came off Metropolitan Park’s stage this November, suggesting a change in downtown Jacksonville might already be underway. The associated Times-Union tell-all drew a large question mark about redevelopment over the park and nearby area, The Shipyards.

Both fall close to Everbank Field and the upcoming flexible football field–amphitheater, Daily’s Place. Khan has a large hand in both of these locations, and could be interested in helping the city further redevelop its downtown waterfront.

Developing the downtown area reaches beyond the roads and land itself, though. The Skyway, a people mover known for not moving many people, may also benefit from the attention the rest of the area is getting, and affect some of Jacksonville’s streets in the process.

The Skyway has long been a staple of the Jacksonville skyline, and renovations are in the works to modernize the system, much like the rest of the growing downtown area. The changes could alter some of Jacksonville’s roads, and may even send the Skyway down to the pavement in some places.

The Jacksonville Transportation Authority oversees much of the city’s transportation infrastructure, including the Skyway and the city’s bus system. The organization hosted a public forum in mid-November that is looking to expand and alter the people mover to fit the city’s needs.

One big focus area includes expansion into burgeoning neighborhoods like Five Points and the historic Springfield district, according to the Jacksonville Business Journal. But the other has to do with the line itself, which uses older vehicles that could be sped up or have their capacity increased.

New vehicles and new lines could drastically reshape the Skyway’s use, but the project is only in its infancy.

Jacksonville’s future looks bright, and its direction with travel and entertainment becomes clearer and more compelling by the day. One thing is crystal clear though: development brings construction, and construction brings traffic. Taking new routes, traveling through construction zones, and dealing with hectic changes to the road are just some of the inconveniences drivers may face navigating downtown Jacksonville in the near future.

Our car accident attorneys in Jacksonville are experienced with all types of all auto accidents, including trucks and motorcycles. They may be able to help manage your claim by investigating the circumstances of your accident and negotiating with insurance companies on your behalf.

Fill out our risk-free, no-cost case evaluation today, if you would like to find out exactly how we may be able to help.