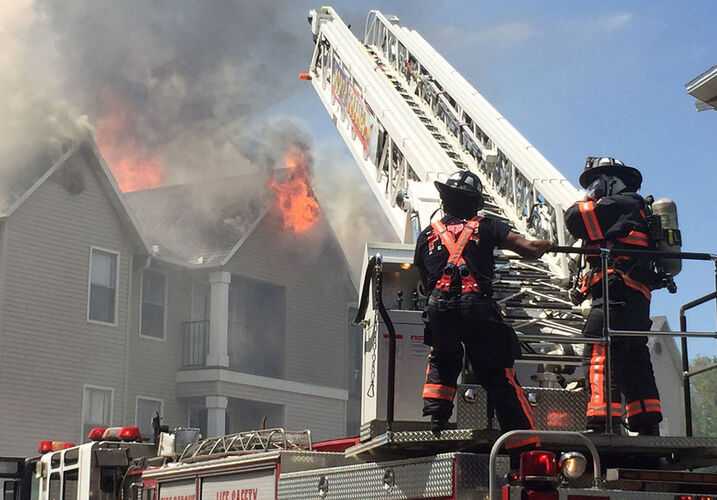 A three-story apartment building in Naples saw multiple units on fire Monday afternoon that caused a partial collapse that trapped multiple firefighters, one of which was hospitalized, reports say.

The fire at Bear Creek Apartments ultimately displaced 47 people from their homes, according to the North Collier Fire Rescue District, and the building has been condemned.

Most were treated on scene. One firefighter{:target="_blank"}, according to Wink News, was hospitalized but is expected to fully recover from his injuries.

It’s expected that at least four of the 12 apartments in the building were completely destroyed, according to reports.

Naples News{:target="_blank"} spoke with John Biero, a resident of the Bear Creek Apartments building, who learned of the fire after his wife and daughter returned home to find it. His wife also ran in to save the family cat.

A displaced Biero was conflicted, telling Naples News, “This is awful. But it's no one's fault.”

Those looking to help the displaced families should contact the local Red Cross, who not only helped evacuees during the fire but are currently accepting new clothing, bedding, and canned goods donations for those affected.

Keeping Your Apartment Safe From Fires

An investigation of the fire remains underway, and it is still unclear how the fire started and subsequently spread.

However, it remains critical as ever to strongly consider how best to improve the fire safety of your home, particularly if you live in an apartment of some kind.

Not all properties are equipped with proper fire safety tools, nor do they all have the safest, most up-to-date electrical wiring. These are particularly important things to consider, as they can lead to fires you don’t even notice at first.

Fires can spread quickly, but they can also take time to develop. Wink News reported that some residents had smelled smoke before the fire — and as much as an hour before an emergency call was placed.

It’s important to not take the most obvious-seeming fire safety tips for granted. Fire extinguishers may be an obvious suggestion of fire safety equipment to have, but not all apartments are equipped with them, despite being required by the Naples code of ordinances{:target="_blank"}. Similar tips include installing smoke detectors and having clear fire escapes.

These sound simple, but are so often forgotten, and fires are caused and do more damage as a result, leading to questions of liability and damages.

The damage a fire can do in an apartment building is unique in how it can spread to other people’s homes, displacing multiple people as this one has.

If you’ve dealt with fire damage in your apartment, it’s important to understand what went wrong, who was responsible, and how you may be able to receive compensation for your losses. Contact Morgan & Morgan to learn more about your possible options.