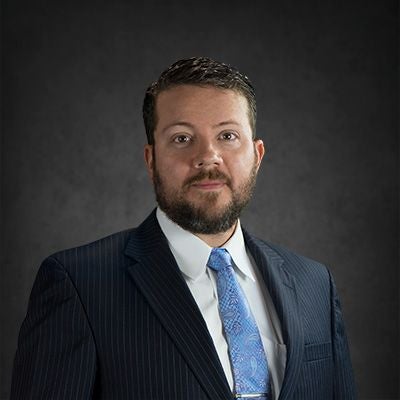 Mr. Humphries then attended Florida Coastal School of Law on a full scholarship where he graduated at the top of his class in December 2003. While he attended law school, he was a Case Note editor for the law review and a member of the moot court honor board. He also had the privilege of being an intern for Justice Peggy Quince of the Florida Supreme Court.

Mr. Humphries then joined the insurance defense firm of O’Hara Halvorsen Humphries, PA, in October 2003. He started as an associate and eventually became president and co-owner of the firm. Mr. Humphries spent 11 years defending major insurance companies and its insureds. He was the lead trial lawyer at the firm having tried over 50 cases to jury verdict, including wrongful death, legal malpractice, breach of insurance contracts, trucking accidents, slip and fall, negligent security (shooting), and a variety of other types of cases. In 2013, Mr. Humphries was invited to join the prestigious Claims and Litigation Management Alliance (CLM), which is an invitation-only national organization created by the claims and litigation management industries.

Mr. Humphries was selected by his peers to join the American Board of Trial Advocates (ABOTA), a national association of experienced trial lawyers and judges dedicated to the preservation and promotion of the civil jury trial and elevating the standards of integrity, honor, ethics, civility, and courtesy in the legal profession.

No matter how much experience a lawyer may have in civil trial, only board certified civil trial lawyers are allowed to identify themselves as specialists or experts in this area of law.

Mr. Humphries is also a board member of the Jacksonville chapter of Hope Worldwide, an international charity that providers volunteer services to the poor, sick, and suffering, throughout the world.

Mr. Humphries is licensed to practice in both federal and state courts in Florida and Georgia. He handles personal injury and consumer protection cases at Morgan & Morgan.