Q&A With Miguel A. Dominguez 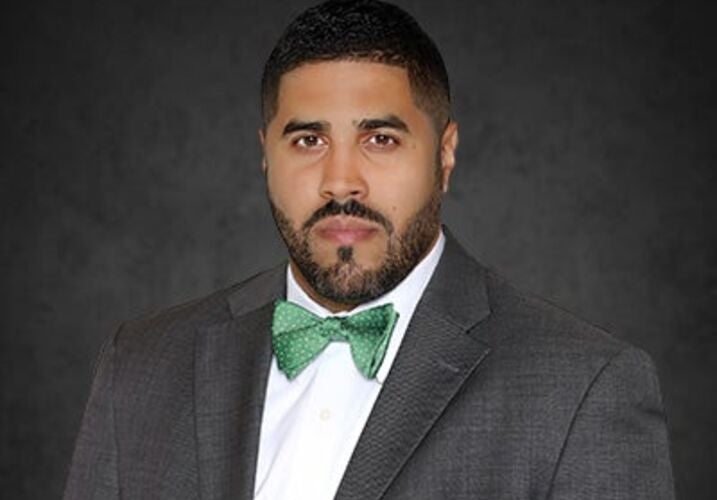 Morgan & Morgan’s success over the last three decades was made possible by the talented attorneys on our team, all of which are committed to going the extra mile for the clients who depend on them. Miguel A. Dominguez, a South Bronx native, is one of those very attorneys, as his unique skill set allows him to communicate persuasively with tact and compassion in the courtroom. Beginning as a social worker in Atlanta, Mr. Dominguez found his passion for helping others. He enrolled in law school to earn a position where he could prevent the systemic cycles that prevent communities from enjoying a safe environment, much like what he witnessed in his childhood. Since then, he’s worked in a variety of roles, but his mission remains the same: helping the victims of civil rights violations and personal injury cases find success in their legal challenges and move on from the situation towards a better future.

Affectionately referred to as “the Denominator” by his colleagues, Miguel Dominguez has proven to be an undeniable asset to both Morgan & Morgan and victimized individuals everywhere. We had an opportunity to speak with Mr. Dominguez, and our conversation is transcribed below:

This interview was lightly edited for clarity.

What Sparked Your Interest in Becoming an Attorney?

As a kid, I didn’t plan on becoming an attorney. I came from very humble beginnings in the South Bronx, which was a war zone back in the early ’80s. If you’ve ever heard the expression, “the Bronx is burning,” that was my neighborhood. There weren’t many role models, and there was nothing positive about the school system at the time, so not many people were dreaming of becoming personal injury attorneys. There wasn’t anyone that I surrounded myself with back then who would have imagined I would end up becoming an attorney.

It wasn’t until years later, after witnessing police brutality and corruption in the South Bronx firsthand, that I began to take an interest in civil rights and civil rights violations. Additionally, my mother was involved in a terrible car accident that she never truly recovered from, which was only made worse by our family’s lack of insurance. For us, it was a decision that most poor people have to make to survive financially: do you buy adequate insurance or feed the family? The combination of my neighborhood environment and my family’s legal struggles ultimately made me interested in law, personal injury, representing people, and advocating for justice.

What Is It About Personal Injury and Civil Rights That’s Made You Dedicate Your Life to Helping Others?

For me, personal injury and civil rights are my main focus. Personal injury can look very different between cases, but not many people know that it also includes negligent security cases. These situations involve landlords who own property that is dangerous due to crime, who do nothing to make it safe and profit from those suffering in these living conditions. Whether it’s a rundown motel or an apartment complex in a dangerous area, these are the situations I’m interested in.

On the other hand, civil rights involve all kinds of injustices and terrible living conditions for those who are locked up in detention centers, jails, and prisons across the country. Some of the worst injustices happen in these environments, and unfortunately, not many people care about the victims. Many of these individuals are sentenced to a few years for a minor crime, yet they leave the facility in a body bag due to the unsafe conditions. There are also sexual abuse cases that occur at these government and community facilities, which are designed to be safe havens for the vulnerable. All of these terrible circumstances that our people face interest me because it’s an opportunity to make a positive change for those who are suffering.

How Have Your Clients Impacted You Personally And How You Practice Law?

From my vantage point as a trial attorney and minister of justice, you need to be emotionally invested in the lives of the people you serve. I wasn’t the architect of my own life experiences, but I know that I’ve been uniquely prepared to do the work I do and serve humanity in a positive way. In criminal law, the emotional stakes are extremely high whether you’re defending or prosecuting. Each case concerns someone whose life hangs in the balance between going to prison or not, and on the prosecution side, you’re representing the family of a victim who might not be able to speak for themselves. These families are looking for justice, closure, and are in pain from the travesty or violence that they’ve collectively experienced, making it even more important to help them find solace in their case.

I bring all of those experiences, whether good or bad, into my civil cases today. For example, I just recently had a trial where we recovered $1.2 million for a young man that was involved in a car wreck with a decorated Atlanta detective. The young man’s injuries were severe, and we were going up against the city of Atlanta because the detective was dishonest about his actions and denied responsibility for the accident. Long story short, the city refused to adequately value our client’s losses, which resulted in a $40,000 pre-trial offer. My client was terrified, as we both understood how government agencies and corporations will use their size advantage to bully the little guy. I used the courtroom to level the playing field, and relying upon my former experience as a prosecutor and my experience as a criminal defense attorney, I was able to help my client recover from his unfortunate circumstances. In the end, you’re not going to beat me when you’re on the wrong side of the issue, especially when I’ve emotionally connected to my client and their story.

What’s the Worst Advice You’ve Received or Heard Given to Another Attorney?

I think that the worst advice is given to young attorneys fresh out of law school. People will say, “Hey, you can do this on your own. You look good in a suit, and you did well in the mock trial, so go hang out in your own shingle and make a living for yourself,” rather than giving them the opportunity to grow and develop as an attorney. This can seriously hinder young lawyers, as the speed at which they develop and the quality of their skills is going to vary significantly based on their initial experience in a given learning environment. Law firms are workplaces with a lot of different levels of experience, and when you’re surrounded by all that expertise and talent, you’re ultimately going to reach your goal a lot sooner than if you kept your head down and tried to figure it out on your own. Young lawyers should surround themselves with opportunities to learn every day, not seclude themselves in a cubicle and attempt to take on the world by themselves.

What Change Do You Want to Make in the World of Law in the Next Five to Ten Years?

Some of that work can be accomplished through the struggle for civil rights, but I think that we have a lot of legislative work to do first. We need judges on the federal bench who can make the right decisions and operate from a people-first perspective, a common-sense lens, and see how the laws affect the common person. Right now, these judges have more of a desire to be respected scholars than they want to do the right thing, and it’s become a dangerous epidemic within the legal industry. It’s the reason why the common man is often exasperated, exhausted, and frustrated by our system of justice; it’s all a result of politicizing the bench.

On a smaller scale, I’d like to bring about a positive change in how the public views the legal profession. One client at a time, I can show that I do what I do for all the right reasons. I feel for the attorneys and judges that don’t, but it’s hard sometimes because their behavior is the reason that people question the integrity of law in the first place. In fact, I won’t repeat lawyer jokes because they perpetuate the negative stereotype that I’ve aimed to change. There always needs to be someone representing the little guy, and I want myself to become the voice for this voiceless minority. That change comes by doing the right thing every day, even when it’s difficult.