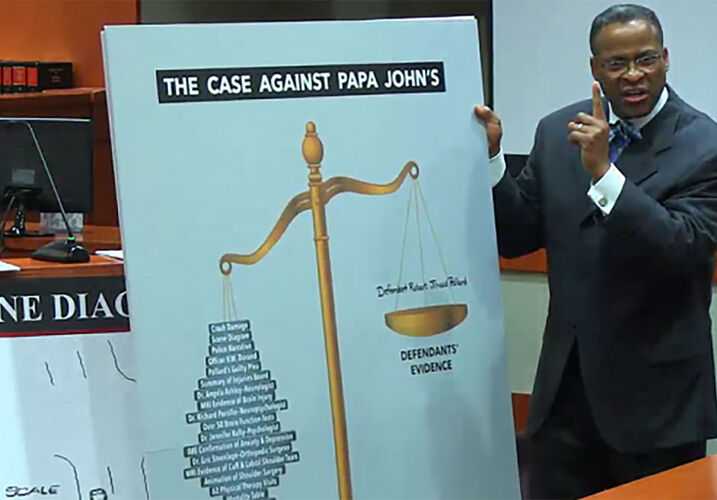 We are very happy to announce a major victory for our client, Glenda Williams.

Attorneys Keenan Nix and Christopher Graddock were able to secure an $11 million jury award for Williams, who sustained serious injuries when her vehicle was hit head-on by a pizza delivery driver in Atlanta.

Williams was driving home from church with her daughter the night of March 6, 2014 on Rogers Lake Road in DeKalb County, Georgia when Robert Pollard, a pizza delivery man for Papa John’s, struck Williams’s car after losing control of his vehicle and crossing over the center line.

All three people suffered concussions from the accident. Williams was taken to the Rockdale Medical Center emergency room after declaring she had a headache and felt dizzy. Although she was released that night, she was later diagnosed with post-concussion syndrome and brain damage.

Yet, when it came time to settle her claim, the defense only offered a woefully insufficient $220,000, despite that being the cost of her medical expenses alone.

The meager settlement Williams was offered stemmed from the defense’s claim that Williams’s injuries were not as severe as she maintained and skepticism that Pollard was indeed at fault for the crash.

Nix and Graddock, however, refused to settle, wanting to get Ms. Williams the compensation they knew she deserved. Even when the defendants (Pollard and Papa John’s) upped their settlement offer to $1 million on the first day of trial, our Nix and Graddock decided to keep fighting. They made the case that Williams' injuries have changed her life forever, and she continues to battle nausea, dizziness, irritability, blurred vision, and headaches. Additionally, her ability to concentrate, her attention span, and her memory have suffered, causing her constant confusion and anxiety.

The defense fought every part of the case, from causation, to liability, to damages.

Lead defense attorney R. David Ware blamed the accident on Williams, who he claimed was speeding when Pollard’s vehicle hydroplaned and struck her.

“Had she just done another maneuver, she would have avoided the wreck altogether,” Ware told the jury.

However, these challenges were deftly parried by our experienced trial attorneys. They called expert medical witnesses to the stand who testified to the validity of Williams traumatic brain injury, post-traumatic stress disorder, anxiety and depression.

After a short deliberation, the jury unanimously agreed. Graddock and Nix were able to secure an $11 million verdict for Williams’s damages, which will drastically improve her quality of life going forward, as she will be able to get proper treatment for all of her injuries. This would have been impossible had she accepted the original settlement offer.

If you or someone you know has been injured in a car accident, the attorneys at Morgan & Morgan may be able to help. Like in Ms. Williams’s case, the parties at fault for an accident will do anything in their power to avoid paying you what you deserve. That’s why having experienced car accident lawyers is essential to getting justice after an accident. Contact us for a free, non-binding case evaluation today.